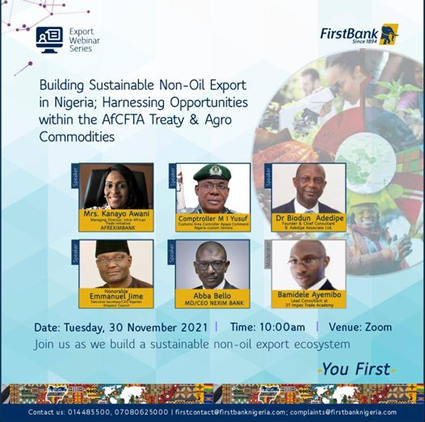 The event is centered on deliberating opportunities that will enhance the country’s expansion of its drive towards diversifying the national economy, thereby reducing the reliance on oil as a mainstay of the country’s revenue.

The first series of the virtual event is scheduled for 10 am on Tuesday, 30th November 2021 via Zoom meeting.

To register and be part of this transformational knowledge session, click on this link-https://www.firstbanknigeria.com/business/non-oil-export/. Registration is Free!!

The event is themed “Building Sustainable Non-Oil Export in Nigeria; Harnessing Opportunities within the AfCFTA Treaty & Agro Commodities” and will have the attendance of Mr. Segun Awolowo MD/CEO, Nigerian Export Promotion Council (NEPC); Dr. Biodun Adedipe, Founder and Chief Consultant of B. Adedipe Associates Limited (BAA Consult)  amongst others, as guest speakers.

The webinar series aims to facilitate sustainable exports as well as guide participants on ways of navigating the hurdles and challenges of exports in Nigeria. The webinar will explore the market and economic trends, unique export opportunities, and potentials within the non-oil export industry across the geopolitical zones in the country.

The importance of exports in Nigeria remains a front-burner conversation by individuals and organizations as it provides a means of increasing the markets for producers, and an opportunity to attract the much-needed foreign exchange earnings to boost the national economy, which is critical to expanding its Gross Domestic Products.

Speaking on the event, the Group Head, Marketing & Corporate Communications, Folake Ani-Mumuney said: “in recent years, the country has witnessed increased activities by the government towards diversifying the economy, thereby boosting the export potentials of the country – beyond the contribution of crude oil – which has been the mainstay of the national economy for many decades.

Our forthcoming Non-oil Webinar series will expand discussions that are crucial to the growth of Nigeria’s export potentials as we unlock numerous opportunities that will promote the economic diversification drive of the government which is essential to the continued growth of the national economy, especially with the current business challenges posed by the pandemic.”

Betamark Organises 2-Day Training For Entrepreneurs, SMEs On How To Make Yoghurt With Soy Powder 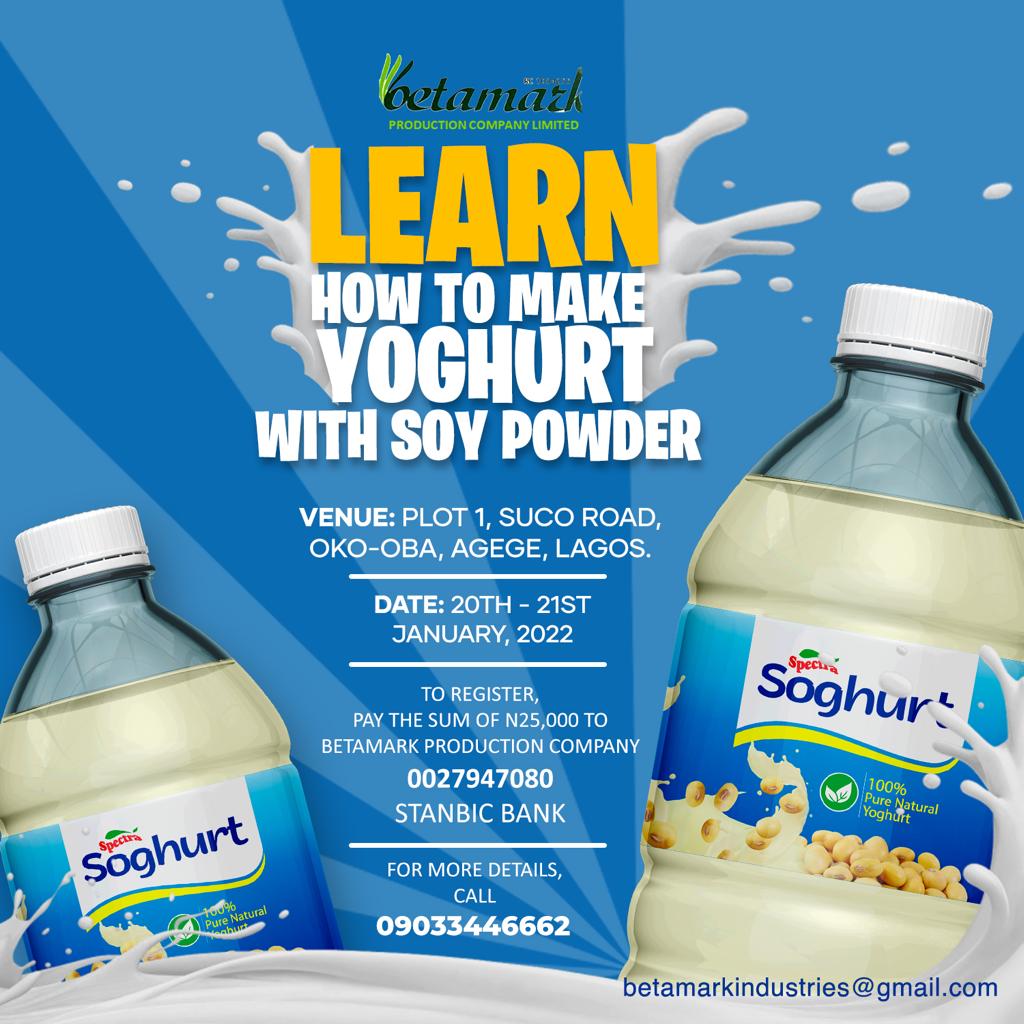 Betamark Organises 2-Day Training For Entrepreneurs, SMEs On How To Make Yoghurt With Soy Powder

Betamark Production Company Limited has organised two 2-day training for entrepreneurs, SMEs in food production on how to start Soy Yoghurt with Soya Powder in Nigeria.

The soy yoghurt has appealed to the tastes of diverse cultures as most milk packaging companies in Nigeria have adopted soy powder technologies.

With the increasing awareness of the nutritional value of soy powder, ease of preparation and availability of the raw materials, the market is assured. It is everyone’s delicacy who has tasted it, especially school children, workers, oil and young.

Betamark Production Company Limited has teamed up with Spectra Industries to equip willing candidates with a two 2-day intensive training programme on 20-21 January 2022 aimed at supporting small businesses to grow in the food production sector.

Interested candidates are to pay #25,000 to BETAMARK PRODUCTION COMPANY ACCOUNT NUMBER- 0027947080 STANBIC IBTC BANK and send details of payment to betamarkindustries@gmail.com and for more details call 09033446662.

Apart from the lucrative nature of this business, it is also rich in vitamins and helps to nourish the body. Invariably, you are nourishing the Nigerian society as you sell yoghurt to them.

The word “Yoghurt” is no longer a new term to many Nigerians as they have come to love ice cream because of its rich nutritional content and amazing soured milk taste, adding Soy Powder is another rich taste that any yoghurt lover cannot resist.

Yoghurts have become a choice for many Nigerians both kids and adults alike. It is not uncommon to see school children enjoy yoghurts with snacks like buns, chin-chin, sausage roll, eggroll, wheat, meat pie and other snacks.

This is not limited to children alone as adults do the same especially at workplaces and when they are travelling, thus making yoghurt marketing in Nigeria a very lucrative business venture to go into.

One of the ways to start soy yoghurt production in Nigeria is becoming interesting and is by not only limiting your business choice to yoghurts alone but also including other variants like soy powder.

The physical programme is a two 2-day training program that will provide business owners with supports to accelerate food production skills. 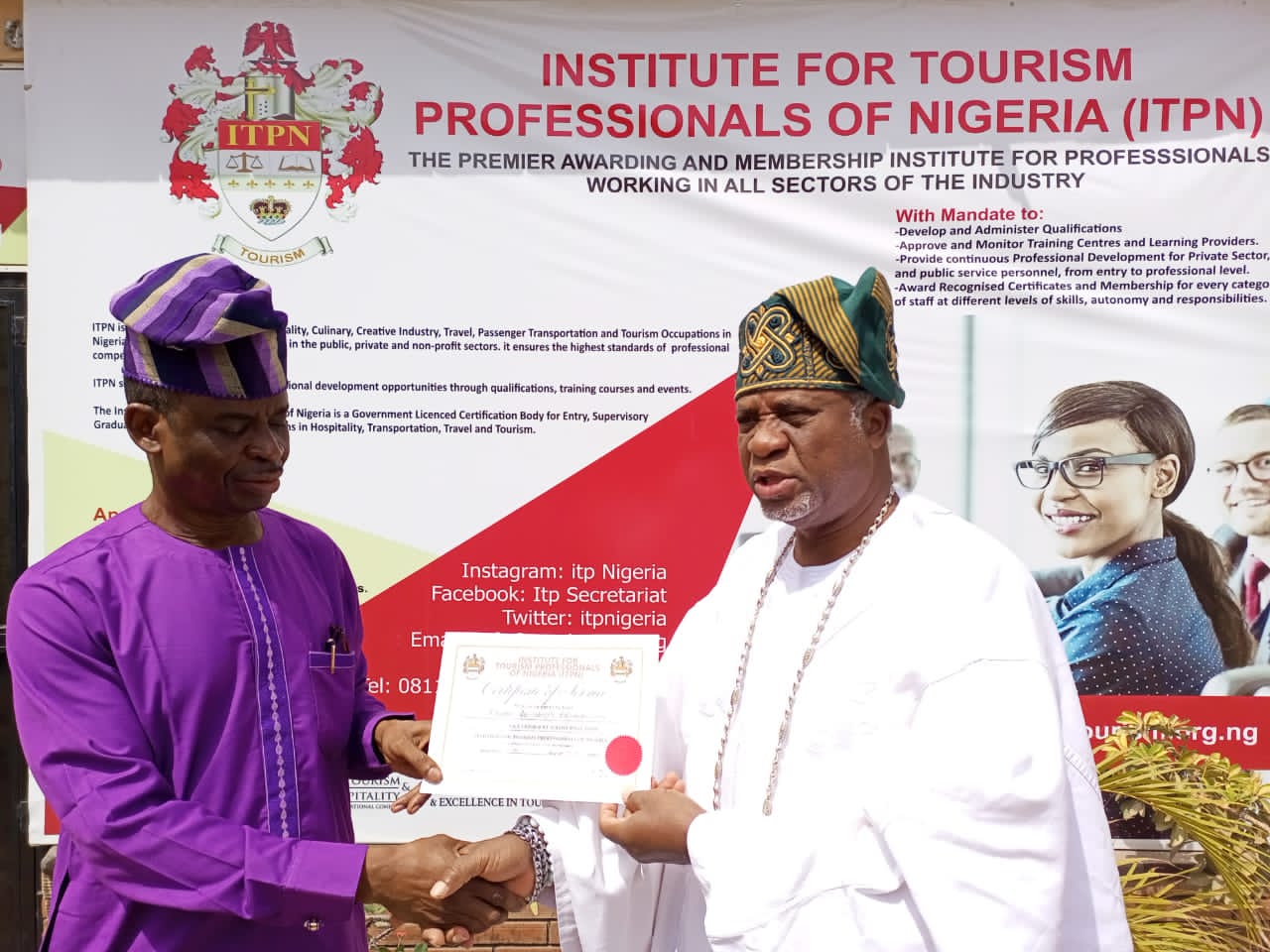 …emulate Otunba Olumoko by remaining steadfast as its ambassadors in the promotion of its aims, says Chief Odusanwo

The National President of the Institute for Tourism Professionals of Nigeria (ITPN), Chief Abiodun Odusanwo FITPN, has extolled the virtues of Otunba Ayodele Olumoko as a dedicated Fellow of the Institute who has put in his very best to place the Institute on a sound footing during his official induction as the National Vice President, SouthWest zone of ITPN.

His leadership qualities are impeccable and his network within the corporate circle is a factor that cannot be underestimated. He has served humanity meritoriously, a bonafide member, Past President of Rotary Club of Ikeja in Lagos State.

Otunba Ayodele Olumoko, Chairman of Infogem formed in I998, joined FTAN as an Associate (now Affiliate) Member following which he became the Chairman of the Lagos State Chapter between 2007 and 2010 and later became the Secretary of the South West region of FTAN.

Chief Abiodun Odusanwo who made the commendation while presenting the Certificate of Office to Otunba Ayo Olumoko at the Headquarters of the Institute in Abuja on Thursday 6th January 2022, said Otunba Ayodele Olumoko has been one of the founding fathers and promoters of culture and tourism in the country and whose contributions have impacted positively well on ITPN in the upliftment of its tenets and ideals for the growth of the institution.

Speaking further, Chief Odusanwo called on other members of the Institute to emulate Otunba Olumoko by remaining steadfast as its ambassadors in the promotion of its aims and objectives to the larger Nigerian society and importantly, to critical key players and stakeholders in the travel, tourism, culture, hospitality, and creative industry as well as its allied branches.

He noted that ITPN has four major mandates which are – to develop and administer Qualifications; approve and monitor training centres and learning providers as certificate Awarding body; to provide continuous professional development for private sector operators and public service personnel and to award recognized certificates and membership for every category of staff at different levels of skills in the tourism, and allied areas of the industry.

In his acceptance speech, Otunba Olumoko said he felt highly honoured with the continuous call to professional service which according to him will spur him into offering greater and better services to the Institute in particular and the country’s travel, tourism, and hospitality industry at large.

He noted that tourism, especially cultural tourism remains, one of the country’s untapped goldmines that if properly harnessed, has the potential to lift millions of Nigerians out of poverty through job provisions and employment opportunities.

Otunba Olumoko then called on all key players and stakeholders in the industry to join hands with ITPN in its efforts to enhance professional practices and conducts of both private sector practitioners and public service personnel to enable the industry to provide better quality service delivery as well as help in salvaging Nigerian economy for better growth and development.

The Institute for Tourism Professionals of Nigeria is the Nigerian premier national certification and professional membership body for hospitality, travel-tourism and allied occupations. It represents members working in the public, private, and non-profit making organizations which ensures the highest standards of professional competence of practitioners in the Nigerian tourism and hospitality industry.

BUA Cement Plc has signed an agreement with Wartsila OY of Finland for the construction of a 70megawatts dual-fuel power plant for the BUA Cement Sokoto Line 4in Sokoto state, North-West Nigeria.

This announcement comes as BUA Cement recently revealed that it was looking to boost its production capacity in Nigeria over the next 3 years with new plants in the works.

In addition, this will be the second plant to be constructed by Wartsila for BUA Cement – the first being the BUA Cement Sokoto power plant scheduled to be commissioned alongside the plant in November 2021.

Speaking at the signing ceremony, Abdul Samad Rabiu, Chairman of BUA Cement Plc who signed on behalf of the cement producer said BUA Cement will continue to invest strategically in the West African Cement industry to enable it to bridge the huge infrastructure and housing deficit.

According to Rabiu, “BUA Cement is happy and pleased with the progress that Wartsila made with the construction of the power plant we initially purchased for our BUA Cement Sokoto Line 3 which we expect will begin commissioning by November alongside the power plant. We believe Wartsila will bring the same level of efficiency, technical expertise, and professionalism to bear in ensuring that this new power plant for the 3million Mtpa BUA Cement Sokoto Line 4 will be completed on schedule by the end of next year as we look towards bringing BUA’s total capacity in its Sokoto plant to 8 million metric tonnes by early 2023 and 17million metric tonnes across all its plants by the same time.”

On his part, Mark Thiriet, Energy Business Director at Wartsila West Africa said Wartsila was proud to partner with BUA Group on this BUA Cement Sokoto Line 4 project. He said that Wartsila will bring its technical expertise and globally recognized technology to bear in bringing the project to completion.

Currently the second most capitalized manufacturing company on the Nigerian Stock Exchange (NSE), BUA Cement is committed to quality – a differentiating attribute, driven by its people, innovation, and technology; and positioned to solve West Africa’s cement under capacity while driving economic growth and development.