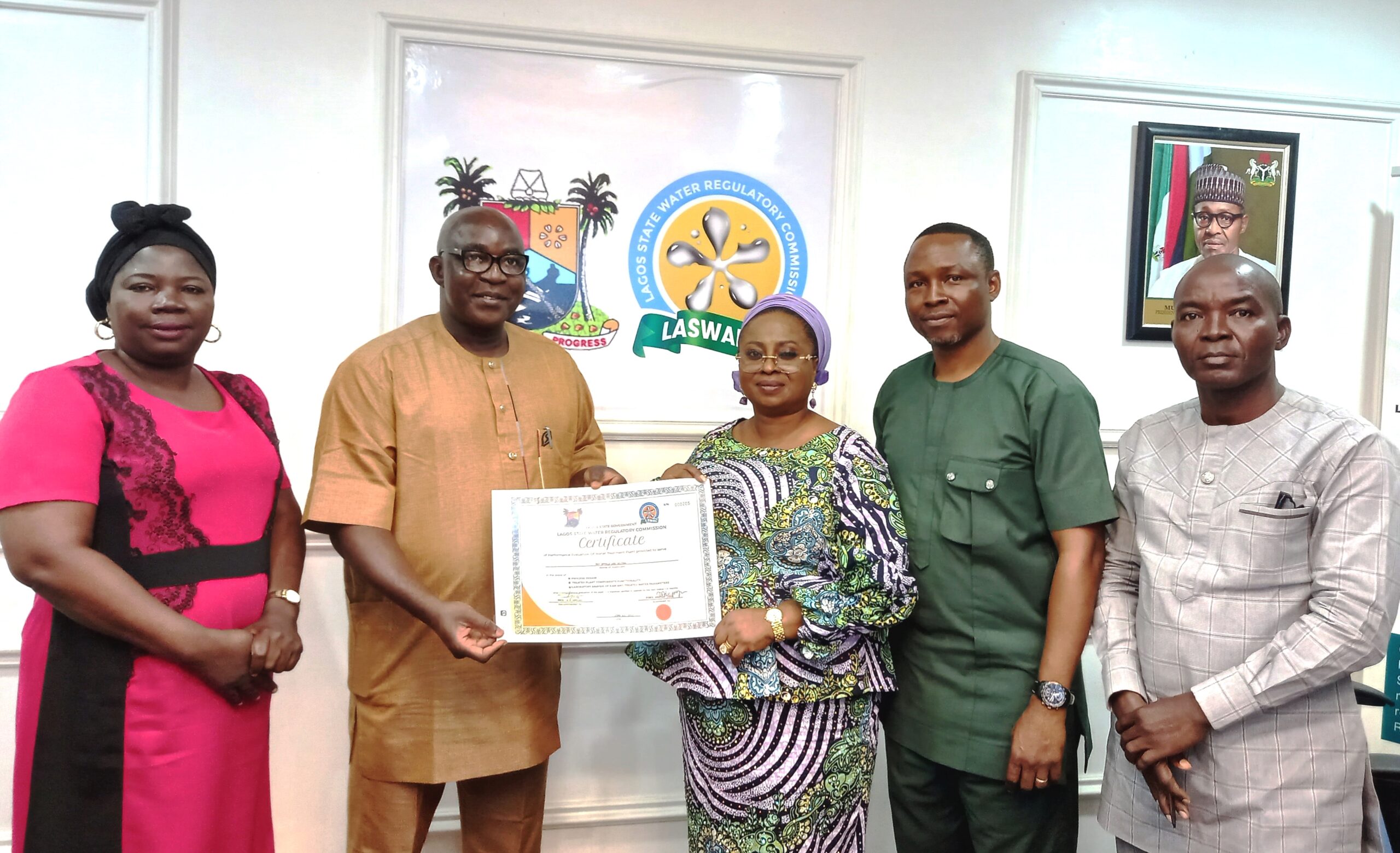 The Commission, in its regulatory role, issues drilling licenses to commercial borehole/water well drillers, rig owners, and practitioners water abstraction licenses as a form of regulation for groundwater management, especially considering the environmental impacts and health of residents.

Executive Secretary of LASWARCO, Mrs. Funke Adepoju who presented the license and permits to the management of the hotel at the Commission’s head office in Alausa, said the development followed the willful compliance of the service provider to water governance laws, adding that the water being produced by the hotel is fit for human consumption.

“The official presentation of regulatory licenses and permit to Eko Hotels and Suites Limited is in recognition of the regulatory compliance of the state’s guidelines on the regulation of groundwater and delivery of WASH (Water, Sanitation, and Hygiene) services.

“The management of the hotel has clearly demonstrated that it remains resolute in complying with the state’s regulatory guidelines by obtaining the necessary permits and licenses as required by law. Today’s presentation is, therefore, apt to serve as an award and acknowledgment of compliance and to incentivize other players in the sector,” Adepoju said.

She said the present administration under the dynamic leadership of Mr. Governor, Babajide Olusola Sanwo-Olu remains committed to creating a conducive atmosphere for businesses to thrive, while also ensuring that operators in the WASH sector continue to comply with regulatory guidelines to safeguard the health of residents and secure the environment.

“You will recall as COVID-19 palliative to cushion its effect on businesses, Mr. Governor, in his magnanimity, approved a waiver of all charges up to December 2019 and a concession of 75 percent per liter on water abstraction charge, as well as a significant reduction for commercial/industrial borehole permits,” she said.

Responding, the Company Secretary/Legal Adviser of Eko Hotels & Suites Limited, Chief Samuel Alabi said the resistance put up by some stakeholders against regulatory efforts of the state government was due to ignorance, saying the government cannot but regulate the sector in the best interest of all.

Alabi, who is also the President of the Hotel Owners and Managers Association of Lagos State (comprising affiliate bodies of All Hoteliers Association and Association of Fast Food and Confectioners of Nigerian), as well as a member of the Governing Council of Nigeria Employers’ Consultative Association (NECA), said his organization was fully in support of the regulatory initiatives of the state government for the WASH Sector as championed by LASWARCO.

“If the government is irresponsible, the consequences of an unregulated water regime will reflect directly on an increase in the health budget. It is, therefore, compulsory for a responsible government to regulate water abstraction, production, and even distribution. It is in this regard that our company recognizes and stands firmly with the regulatory efforts of Mr. Governor as represented by the able and dynamic Executive Secretary of LASWARCO,” Alabi said.

He also encouraged the state government to come up with more programs on knowledge sharing and advocacy to educate industry players and the general public on water regulation and other WASH laws for proper understanding and buy-in of the stakeholders. 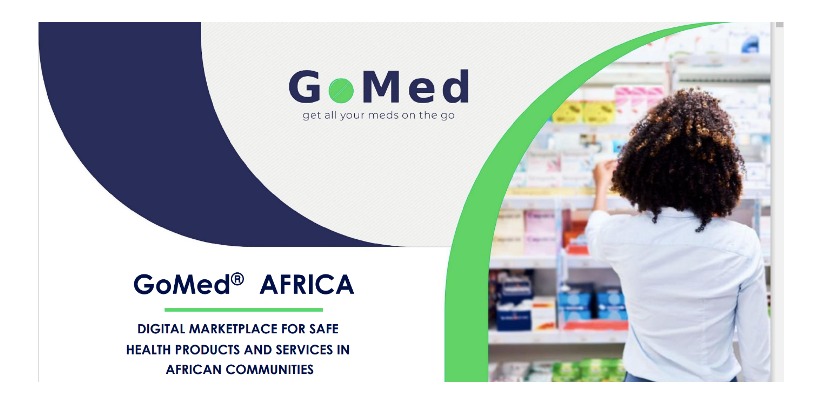 ….partners community pharmacies across Nigeria with tools to showcase their inventory

GoMed, an online marketplace for community pharmacies has launched in Lagos to provide on-the-go access to safe medicines, health products, and services for Nigerians, a strategic move to tap into the thriving Nigeria pharma market which is estimated at $2.5 billion.

GoMed partners with community pharmacies across Nigeria, providing them with the tools to showcase their inventory while exposing them to millions of potential customers within their communities.

With GoMed, community pharmacies regardless of size are able to digitise their sales process to reach even more customers, while users can access an array of pharmaceutical products ranging from prescription drugs to personal care and supplements. Users are also able to order medical equipment, speak with pharmacists or even consult a doctor.

Speaking at the launch in Lagos, Partner, and Co-founder of GoMed Nigeria, Dr. Aaron Grandy said the solution was inspired by the need to provide the tools and resources that pharmacy businesses need to take their services online and scale their operations in the most efficient and profitable manner.

“Most community pharmacies are so busy running their business that they don’t have spare time and resources to build up an online shop with 5,000 to 10,000+ products, manage branding, marketing, and communications, plus coordinate deliveries all at the same time.

“With all these challenges in mind, we asked pharmacy owners and managers if an online solution that they could tap into, enhance their brand and reach more customers would be of interest to them, and of course, it was a resounding yes!” Grandy said.

Other benefits include conveniently serving a wider audience without fear of giving away their business, risking their brand or losing their customers to the competition, and unfettered access to digital tools for better visibility and business insights.

Grandy further stated, “GoMed taps directly into the trust and loyalty that Nigerian community pharmacies have built over the years by being the first point of contact with patients,” adding that GoMed’s mission is to “support and lift up these community pharmacies as they are the real heroes in our story”.

About GoMed: GoMed is a Finnish / Nigerian company on a mission to digitise access to safe health products and services for everyone in Nigeria. For more information, visit https://gomed.ng or email us at contact@gomed.ng 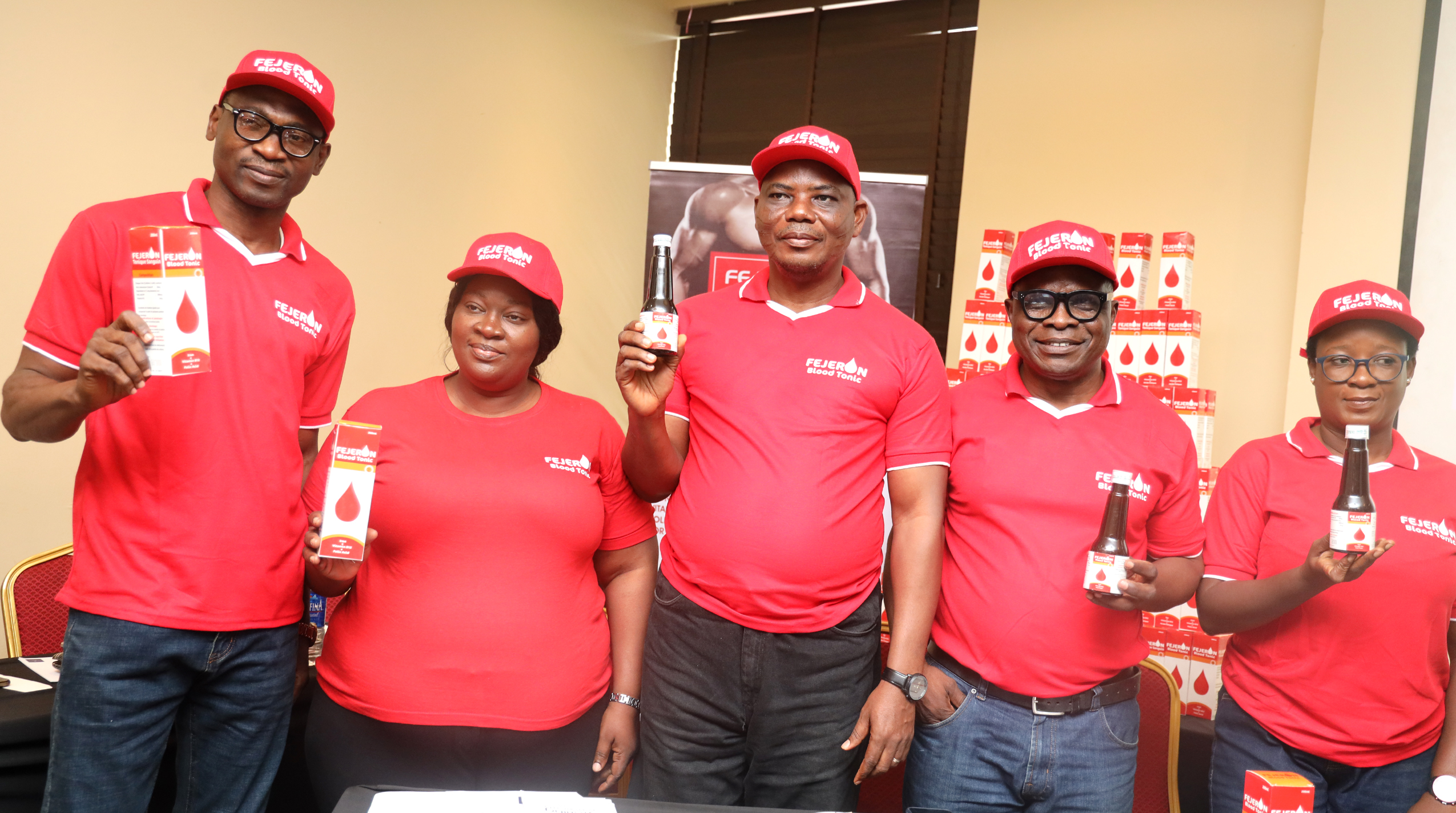 Fejeron Blood Tonic contains iron, Vitamin B12, and folic acid, all essential components that help to facilitate adequate blood supply and replenishment to the body with vital vitamins while enabling a strong immune system.

Speaking at the media unveiling in Lagos on Thursday, September 15, the Chief Operating Officer, of Sterling Biopharma Limited, Mr. Adebayo Adepoju, said that the nature of stress and fatigue that Nigerians encounter on a daily basis requires that their physical and mental well-being is well supported to function at it best and this is why Fejeron Blood Tonic is uniquely formulated for everyone regardless of age or gender.

“At Sterling Biopharma, we believe that everyone deserves to be able to buy simple prescription drugs without breaking the bank. This is why from the moment we entered the Nigerian market, and with our wide range of products, we have made our intentions clear and that is to make quality pharmaceutical products affordable for all Nigerians.

“So, Fejeron Blood Tonic is the latest proof of our commitment to this mission. Despite its premium quality, Fejeron, at the moment is one of the most affordable blood tonics you will find in the Nigerian pharma market, and this is deliberate. All Nigerians should be able to take care of themselves,” he said.

Since its market introduction, Fejeron has quickly become one of the well-sought-after new brands in the pharmaceutical category, and the Product Manager, Olumide Ogunremi, linked the warm embrace of the product to its quality and appeal to the needs of the Nigerians.

He said: “The quick acceptance of Fejeron Blood Tonic in Nigeria is not a surprise to us. The enthusiasm to try out the product and the return purchases across the biggest pharmaceutical markets in Nigeria validate the quality of the product and timeliness of its emergence.”

On what makes Fejeron Blood Tonic unique, Ogunremi promised that both the young and old will love the taste of Fejeron, adding that extra effort has also been put into ensuring that the product has less chance of causing common side effects like metallic after-taste, staining of the teeth; constipation, diarrhea, nausea, and others.

On the brand’s promise to Nigerians, the C.O.O noted that Fejeron Blood Tonic is driven by the belief that truly, health is wealth and they are out to promote this culture among Nigerians, standing by them on the journey to their individual accomplishments.

“We realise that the average Nigerian is aspirational and that explains why hard work is a way of life, regardless of class. However, every dreamer needs an enhancer, a cheerleader, and a support system, a role we are happy to play.

“That is why our online launch campaign is encouraging Nigerians across all socioeconomic classes to jump on our social media handles @myfejeron on Facebook, Instagram, and Twitter to tell their stories with emphasis on what drives them to aspire, using the hashtag #myfejeron.

“We want to celebrate the Naija spirit and all we are saying is that Fejeron feels your hustle and we are with you on your journey to greatness. We will constantly remind you to take care of yourself in order to achieve those lofty dreams. Our biggest assets are our customers and we hold you, dear,” he said.

Hundreds Of Women, Girls Sign Up To Benefits From ‘Girls With Period’ Pad Stash Project In Makoko 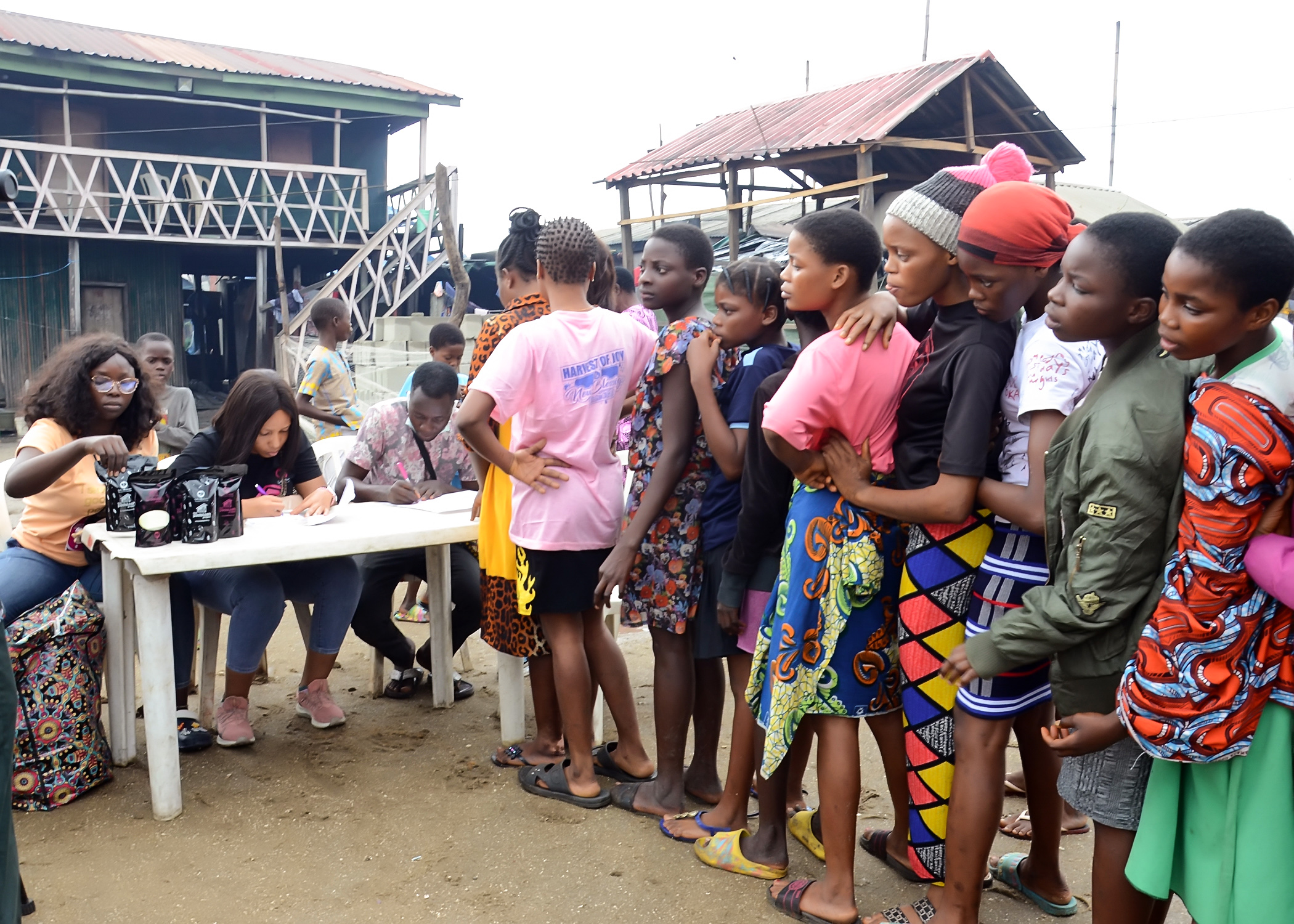 ‘Girls with Period’ a Not for Profit organization ‘launched its Pad Stash project in Makoko on the 30th of August 2022.

The Pad Stash Project is an initiative to provide sanitary supplies on a monthly basis to people living in rural communities who cannot afford these basic amenities.

The first stop for The Pad Stash Project was the girls and young women of Makoko Community.

Being the first of its kind in Africa, The Pad Stash Project is guaranteed to promote menstrual hygiene and most importantly provide for women and girls in impoverished communities who cannot afford this vital need.

The ‘Girls with Period’ team thereafter registered over 100 beneficiaries for the empowerment scheme. The beneficiaries will be receiving sanitary pad supplies monthly.

Membership cards and membership forms were provided and registration was done according to names, date of birth, and addresses amongst other parameters.

They further educated young women and girls on topics relating to menstrual hygiene, sex education, and health care in general.

“We not only intend to make sanitary products free and at their disposal on a monthly basis, but we also intend to educate them about menstrual hygiene and health care, sex education, and confidence and empower them with skills that will fetch them money in the nearest future. The plan is to help reduce and totally eliminate period poverty from Africa”. Founder, Patricia Vin-Okopi said.

The team visited the Minangan health Center Makoko (House on Lagoon) to see women and girls admitted and also get to know how their healthcare system operates.

The medical practitioner at the health center Dr. Ajoke Hazume stated that they had a poor health system as they do not have enough medicine to treat patients and pregnant women.

‘Health care has deteriorated as they can’t afford necessary medicine for treatment, as most female inhabitants who fall ill or get infections from using dirty wrappers for the period, don’t have access to these vital needs due to lack of funds” Dr. Ajoke Hazume said.

The beneficiaries were handed hygiene packs containing sanitary pads and panty liners and were also shown how to use sanitary items.

“We are grateful for the Pad Stash initiative and are also soliciting funds to enable us to get the necessary medicine and health equipment for treatment and childbirth”. She added.

Chairman of the Board of directors for ‘Girls With Period’, Ifeoma ‘Oma Areh further said.

“We are happy to put smiles on the faces of these young women and girls with The Pad Stash Project and we intend to extend this initiative to other geopolitical zones in Nigeria”.

The Pad Stash project seeks to educate and empower more women and girls in the nearest future and is open to the prospect of collaborating with like minds who are aware of challenges faced by females, especially the not-so-privileged ones.